Choro – The Music of Rio

with Duo Violão Plus 1

We are delighted you will be joining us for this special workshop and interactive concert.

Here are all the details you will need and resources to help you prepare.

What to bring: Your instrument and your music (and a lightweight portable music stand if you have one).
For those who don't have an instrument to bring, we will have some percussion instruments available for you to use for the workshop and performance.

A message from our mentors, Duo Violão Plus 1

We are going to focus on Maxixe (a part of Choro).

Maxixe (pronounced Mashishe) is the foundation of Brazilian music, and is based on this repeating rhythm:

Maxixe was the first original Brazlilian music from the mid 19th century.  It was not African, European or something else but was a mix of styles and uniquely Brazilian.  It was a dance that was outlawed and made famous by two composers and pianists Ernesto Nazareth and Chicquinha Gonzaga.  After it became popular in Brazil it spread internationally, becoming adopted in Europe and the U.S.
See below for some historical information about Choro, Maxixe, and the music we will be exploring in our workshop. For even more information about this extraordinary music (including some cool dance videos from the early 20th century), check out the Choro Music Blog.

From the album História do Choro by Duo Violão Plus 1

For this workshop, take a listen to the music and see what might be fun for you to add. If you play a melody instrument, learn the melody and play along. You might want to just play the rhythm or the bass line and keep the groove going. We'll all learn together at the workshop, so even if you don't have anything prepared, we'll all have a great time together.

Composer Ernesto Nazareth was one of the hardest-working musicians in Rio, and one who bridged the pre-industrial and early industrial stages of Rio's music business. He hustled compositions to the various music publishers around time, played piano in the lobby of the city’s first movie theater, and made some of the first recordings in Rio in the early twentieth century. He survived into the radio era and was one of the musicians featured on Rio’s first station. His music, although extremely pianistic, was able to capture the musical essence of the guitar, flute, and cavaquinho (the traditional choro formation) with such nuance that he was considered a true representative of the soul of Brazil and, more specifically, Rio de Janeiro. Brejeiro, a virtual anthem of Brazilian music, was his first and most famous maxixe. Because the new style was considered too syncopated and scandalous, it was forbidden, leaving Nazareth and other composers to use a more “sophisticated” name: tango brasileiro. It was published in Paris and the US in 1914 and helped maxixe become one of the most fervent dance crazes throughout Europe and the Americas. 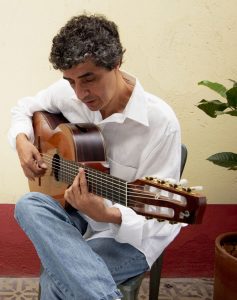 Rogério Souza is a pioneer in developing the style of music that is known today as “choro novo” – innovative interpretations of traditional Brazilian instrumental music while remaining true to the roots of the music. He performs regularly in music festivals, concerts, and workshops throughout Latin America, Europe, the United States, and Asia. His current show focuses on the art of Brazilian guitar and includes original works as well as classic repertoire.  Along with performing, Rogério frequently gives masterclasses and workshops that focus on guitar styles and cover material from his latest books and CDs.

Edinho Gerber possesses a rich musical vocabulary developed in the two countries where he was raised: the United States and Brazil. Navigating effortlessly between the genres of choro, jazz, samba, and blues, he is always in search of the intersection points within his dual cultural identity.  A staple in the Chicago music scene for many years, he was a highly in demand sideman having played with countless U.S. based Brazilian groups, including Som Brasil, Renato Anesi Trio,  A Cor do Brasil, and led the samba-jazz group Zona Sul. He has performed in prestigious festivals and concerts in throughout the United States, Russia, and Japan, and currently resides in Rio de Janeiro where he performs regularly with Duo Violão Brasil and recently released “Benjamim e Edinho” an inventive cross cultural collaboration with Ben Lamar Gay. 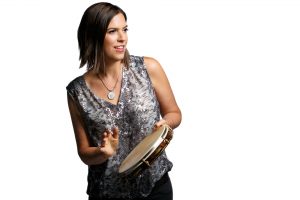 Ami Molinelli is a professional percussionist and educator specializing in Brazilian and Latin percussion. She co-leads the Brazilian and Jazz ensemble, Grupo Falso Baiano with two albums to their credit: “Simplicidade – Live at Yoshi’s” and “Viajando em Choro e Jazz.” Grupo Falso Baiano have been featured on NPR’s the California Report, Radio Latina and Pandora LIVE!

A little more about choro music

The emergence and development of choro in the late 19th century was affected by three forms of Brazilian popular music: the modinha, the lundu, and the maxixe. The lundu, an early song and dance genre, and the maxixe, an instrumental dance form that arose concurrently with choro, exhibit African influences. The wildly popular maxixe made an especially strong impression with its close couples dance style and sinuous movements. From its emergence in the late 1870s to its decline in the 1920s, few genres of popular music were as wildly popular, and controversial, as the maxixe. The music accompanies a fast paced couples dance in which the dancers' bodies are pressed together and the legs are often intertwined.

Here are a few additional resources for those who wish to practice some Brazilian rhythm patterns and to learn more about this tradition.

For those who don't have an instrument to bring, we will have some percussion instruments available for you to use for the workshop and performance.

Thank you to our workshop sponsor, Latin Percussion.

Please email us at info@amateurmusic.org and we will get back to you as soon as possible.

Back to Main Workshops Page