Each session is an hour-long exploration of techniques that will make selected passages from a great choral work beautiful and musical. Although they are not choral rehearsals as such, they will include interludes of singing together through parts and movements of the pieces being studied.

Having been a singer myself, with the fortune of studying with great singer Nicolai Gedda, I have collected many tools from various singers and voice teachers. I look forward to sharing my views on vocal technique in general and choral singing in particular.  In these times of lockdown and social distancing it is more vital than ever that we not forget the power of the instrument we all have inside us -- the voice.

Each session requires a separate registration, although you may register for the entire SERIES before the first session.

All sessions are at 11 am PST, as Ragnar will be joining us from Sweden.

What to have on hand: A computer or other device that's connected to the internet. Registered participants will receive a link to join the workshop. For most of the meeting, all participants will have their own audio muted. If you have questions, you'll use the CHAT feature in the Zoom window to write your questions.

PLEASE NOTE: You must register in order to receive the meeting link.

Go to the online event page for your workshop.

You will be required to log into Eventbrite to access this page. Use the same email you used to register for the workshop. If you have trouble getting to the meeting link, please consult our online access instructions page.

Please note: SERIES participants will receive the meeting link via email each week with instructions. Please contact us if you do not receive this link by the Friday before each session.

We will be working on phrases and segments from these pages, and occasionally we will sing through a longer stretch.

We will sing segments of all voice parts, focusing on specifics that are general to all parts. 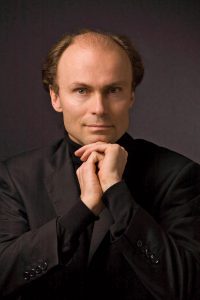 Bohlin has been invited to appear as guest conductor with orchestras and choirs worldwide. He has made many guest appearances with the Swedish Radio Choir, recording two CDs with them and touring the US to great critical acclaim. He has been guest conductor with Chanticleer, the BBC Singers, Eric Ericson Chamber Choir, Royal Philharmonic Choir, Opera Chorus of Stockholm and Formosa Singers of Taiwan, among many others. Orchestral conducting appearances have been with symphonies in São Paulo, Edmonton, Helsingborg, Stavanger Madrid, Shanghai and Malmö.

In 2014 he founded the San Francisco-based 24-voice professional chamber choir Cappella SF, with whom he has made four professional recordings and premiered over ten new choral works.

Bohlin teaches at the San Francisco Conservatory of Music, has taught at the Royal Academy in Stockholm, and was a 2008 visiting professor at Indiana University. He has been awarded the prestigious Johannes Norrby Award for expanding the frontiers of Swedish choral music-making and Chorus America’s Michael Korn Award for the Development of the Professional Choral Art. Conducting studies were with the renowned choir director Eric Ericson, piano with Peter Feuchtwanger in London and voice with the great Swedish tenor Nicolai Gedda. He has also appeared as an oratorio tenor.

Thank you to Capella SF for their generous sponsorship of these workshops!