A Juneteenth Workshop
“Make Some Noise, Get in Trouble”
conducted by Dr. Candace Y. Johnson

Join AMN for the ONLINE PREMIERE of renowned composer Roland Carter’s new choral work inspired by civil rights leader and Congressman John Lewis. Sing online or in person as part of a chorus that will transcend geography and genre.

The Register Now! button will take you to the Eventbrite registration page for this event.

Anyone who wishes to participate in the online world premiere of this timely choral work!

There are three options for participation:

Register at Eventbrite using the registration button. Once registered, you’ll receive an email with a link to your personal access page.
For those who are attending in person, you will get specific instructions via email.

All registered participants will receive a link to the workshop video.

How do I prepare?

The Register Now! button will take you to the Eventbrite registration page for this event. 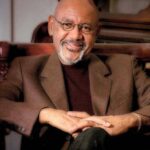 Distinguished composer, conductor, educator, and pianist, Roland Carter is the Ruth S. Holmberg Professor of American Music in the Department of Music at the University of Tennessee at Chattanooga (UTC). His accomplishments as a leading figure in the choral arts include concerts with major choruses and orchestras in prestigious venues nationwide; as well as lectures, workshops, and master classes. From presidential inaugurations to the smallest church, from scholarly presentations for national gatherings of musicians, educators, and preservationists to private coaching with individual singers, Mr. Carter lends his keen ear, bright mind, and talented hands to projects of every sort.

Mr. Carter has served on National Endowments for the Arts’ Heritage, Access and Choral Panels and received an honorary Doctor of Music degree from Shaw University. He was one of the 2003 Tennessee Governor’s Arts Awards in the Distinguished Artist category. In 2004, Carter was elected to honorary membership of the internationally acclaimed Morehouse Glee Club, joining the ranks of only two other musicians so honored during the history of the award – Robert Shaw and Leonard DePaur. Historic Abyssinian Baptist Church (NY) honored Carter with a program of his arrangements and composition in July 2005. For his outstanding contributions to American Music, Carter was given honorary membership in the nation’s largest music fraternity, Phi Mu Alpha Sinfonia and elected to the charter class of Signature Sinfonians. Most recently, he served as guest conductor of the 2008 Yale University High School Festival, and his arrangements were featured in a special recognition program by the 175th Anniversary committee of the Metropolitan AME Zion Church of Hartford , CT. In summer of 2009, The Chamber Choir of the University of Tennessee at Chattanooga, under the direction of Dr. Kevin Ford, released the Volume I of THE CHORAL MUSIC OF ROLAND CARTER.

Unquestionably gifted composer-arranger, it is Carter’s arrangement of “Lift Every Voice and Sing” that is most often used to present the anthem in formal settings. His arrangements and settings have and continue to be performed by orchestras and choirs throughout the world. A colleague of his once shared her belief that the angels sat upon his shoulders and whispered the score for his arrangement of the spiritual, In Bright Mansions Above.

In addition to performance and academic pursuits, Carter has served on several boards including the Tennessee Arts Commission, the Southern Arts Foundation, National Assembly of State Arts Agencies, Allied Arts of Greater Chattanooga. Chattanooga African American Museum/Bessie Smith Hall, and the National Association for the Study and Performance of African American Music. Presently he sits on the boards of the League of American Orchestras, the Chattanooga Symphony and Opera Association, and is an honorary member of the board of directors of the Negro Spiritual Foundation, Orlando, FL, and the African American Music Foundation, San Diego, CA. Carter recently completed his sixth and final year as president of the National Association of Negro Musicians, Inc., the nation’s oldest organization committed to the performance and preservation of African American music. He serves the music ministries of the Cascade United Methodist Church (Atlanta, GA) and the Christian Faith Baptist Church (Raleigh, NC). 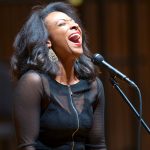 Praised by Opera Wire for her vocal clarity, dramatic presence, and expressive interpretation, soprano Candace Y. Johnson has concertized widely, including guest appearances at Carnegie Hall and The Manhattan Center, and with the Memphis Symphony Orchestra. Johnson is a versatile artist, equally comfortable in opera, musical theater, and jazz. She has performed lead roles in Le Nozze di Figaro, The Medium, Suor Angelica, Fame, and she defined the genre-bending role of Jackie in the world premiere of Howard’s End, America with RealOpera, San Francisco (2019).

In the Spring of 2021 at The Marsh Theater, Johnson will premier a solo musical performance series titled The Art Songs of Black Composers, wherein she uniquely integrates vocal performance, theatrical storytelling, and music analysis — all to champion the songs and lives of African American composers past and present. The first installment of this series runs May 22-23rd and centers on the song cycle Ventriloquist Acts of God by Adolphus Hailstork. Other composers to be featured in this special series include Undine Smith Moore, Margaret Bonds, and William Grant Still, to name a few.

Also a fitness enthusiast, in 2020, Johnson launched FitnesSing!™, a new vocal health approach she designed that combines vocal training with physical fitness and dance. FitnesSing!™ streams live every Friday at noon on The Marsh Theater’s virtual platform, the MarshStream. It is quickly becoming the rave with singers of every skill level.

In 2018, Johnson premiered her first one-woman show, VOX in a BOX– the musical biography of how she found her “voice.” In VOX in a BOX Johnson uniquely fuses her black music heritage and classical training with storytelling to explore themes of identity, race, belonging, and freedom of expression.

On the voice faculty at the University of California-Berkeley since 2009, Johnson teaches applied voice classes and a musicology course she designed based on her research and performance of works by African-American composers. Prior to her current appointment, she was awarded a Chancellor’s Postdoctoral Fellowship in the music department. Johnson earned her doctorate in voice performance from the University of Michigan, where she studied with the late Shirley Verrett, as well as George Shirley and Willis Patterson.

Roland Carter’s Make Some Noise, Get in Trouble