At Home With
Candace Johnson
A Juneteenth Spirituals Workshop 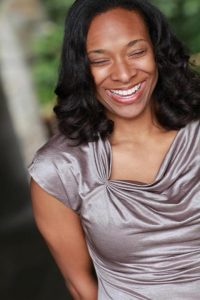 Praised by Opera Wire for her vocal clarity, dramatic presence, and expressive interpretation, soprano Candace Y. Johnson has concertized widely, including guest appearances at Carnegie Hall and The Manhattan Center, and with the Memphis Symphony Orchestra. Johnson is a versatile artist, equally comfortable in opera, musical theater, and jazz. She has performed lead roles in Le Nozze di Figaro, The Medium, Suor Angelica, Fame, and she defined the genre-bending role of Jackie in the world premiere of Howard’s End, America with RealOpera, San Francisco (2019).

In the Spring of 2021 at The Marsh Theater, Johnson will premier a solo musical performance series titled The Art Songs of Black Composers, wherein she uniquely integrates vocal performance, theatrical storytelling, and music analysis — all to champion the songs and lives of African American composers past and present. The first installment of this series runs May 22-23rd and centers on the song cycle Ventriloquist Acts of God by Adolphus Hailstork. Other composers to be featured in this special series include Undine Smith Moore, Margaret Bonds, and William Grant Still, to name a few.

Also a fitness enthusiast, in 2020, Johnson launched FitnesSing!™, a new vocal health approach she designed that combines vocal training with physical fitness and dance. FitnesSing!™ streams live every Friday at noon on The Marsh Theater’s virtual platform, the MarshStream. It is quickly becoming the rave with singers of every skill level.

In 2018, Johnson premiered her first one-woman show, VOX in a BOX– the musical biography of how she found her “voice.” In VOX in a BOX Johnson uniquely fuses her black music heritage and classical training with storytelling to explore themes of identity, race, belonging, and freedom of expression.

On the voice faculty at the University of California-Berkeley since 2009, Johnson teaches applied voice classes and a musicology course she designed based on her research and performance of works by African-American composers. Prior to her current appointment, she was awarded a Chancellor’s Postdoctoral Fellowship in the music department. Johnson earned her doctorate in voice performance from the University of Michigan, where she studied with the late Shirley Verrett, as well as George Shirley and Willis Patterson.

A Spotify playlist from Candace for workshop participants to enjoy.

Hear Candace sing some of these spirituals

“A YouTube playlist of my performances of the spirituals that my pianist and I have arranged for my voice.”

From the workshop
Accompaniment performed by Dr. Eunae Ko Han