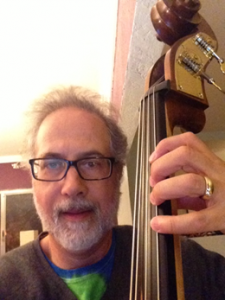 A Guest Blog by Steve Schaefer

I started playing the bass at the age of 50, and it has become a very important part of my life. Sometimes it just takes a while to be ready. 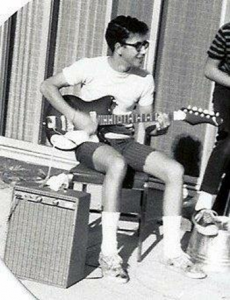 I got my first guitar in 1967. I fell in love with it and played for fun alone and with friends for several years.

My bass story, though, begins in 1972. I’d been playing the guitar for five years and picked up an acoustic one to go with my first, but I decided I wanted to play the bass. I was 18 and out of school now. I don’t remember why, but something about that deep sound really attracted me. And I loved Paul’s bass parts in Beatles songs.

Having few liquid assets, I decided to take my beloved coin collection to a pawn shop in San Francisco’s Tenderloin district to see if they’d take it for a bass guitar. I brought home what I believe was a green Fender Precision bass. I have no photographs of it. I plunked on it a little while, but before long someone broke into my ground-floor apartment and stole it. Looking back, I’m not sure if it had anything to do with coming from a pawnshop.

Disheartened, I decided to start college and move on. I met a woman, graduated college, got married, and had a kid. I worked a series of jobs. I got divorced and remarried and had another child. We started taking our son to music lessons and I was around musical instruments again. My memories of the bass came back, and I decided I wanted one again. I mentioned it to my wife and she said, “why don’t you go get one?” Now that was music to my ears. And this time, I had the means to walk into a nice music store and select one I liked.

I picked out a Fender Precision Bass special (with the Jazz Bass neck), with a sunburst finish. It was a lot like my first one. I took it home with a small amplifier and started taking lessons at the same store where my son was learning the guitar.

I found a book about basses and bass players. In the back, an appendix featured 30 albums with great bass parts that you MUST listen to. That was the source of my first intentional bass-focused listening, and led me to explore more Jazz, Folk, and Bluegrass.

I never intended to play the upright bass. But those jazz albums started to affect me – Scott LaFaro with Bill Evans’ trio at the Village Vanguard I played over and over. I found numerous albums with Paul Chambers covering the low end. But it was one special song that really motivated me to try the big acoustic bass. My wife had an album by Irish folksinger Mary Black, and on it was a track called Columbus. I credit that bass part, and short solo, with helping me decide to investigate the upright bass. So, a little over a year after I began electric bass guitar, I started taking bass lessons on upright bass, instead. 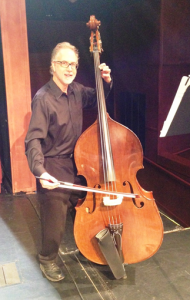 I found my teacher through a sheet posted on a music store bulletin board with the little tear-off tabs. After a satisfactory first lesson, my new teacher and I went to A&G Music in Oakland to rent a bass. I took my lessons and improved, and after eight months of renting, A&G let me apply the entire amount I’d already spent towards my own Chinese made, hand-carved upright bass. (Photo: with my bass before a concert with the Castro Valley Orchestra, 2014)

Meanwhile, I still played my electric Fender, with a band, Red Paint, from late 2006 until early 2013. We rehearsed weekly and played a few local gigs. Then, I helped form a five-member blues band, which evolved into a four-person group, Fault Line Blues Band. I play mostly electric with them, but I have started adding in the upright part of the time. I’ve also started playing a five-string bass guitar—it was my 64th birthday present.

As my upright abilities improved, I wondered what to do. My local adult school sent a flyer that listed an orchestra class. I had some classical background from my childhood clarinet playing and my mom’s participation in community orchestras on the cello. So, in the first week of January 2007, I went to my first class meeting.

It was scary at first, but I took to the music quickly. In the 10 years I spent with the orchestra, we rehearsed weekly and performed about 100 pieces, including three Beethoven symphonies, Mozart, Dvorak, Shostakovich, and many more, including a couple of original debuts by local, living composers. 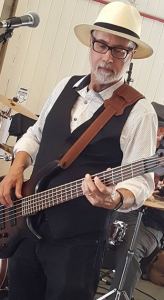 During that time, I also discovered chamber music workshops, including weekends with the Chamber Musicians of Northern California (CMNC) and the wonderful week-long sessions at Humboldt State University. The local workshops were great for improving my skills and meeting lots of like-minded players. The week-long sessions at Humboldt are a joy – summer camp for grownups! I attended in 2010 and 2012, and I’m going back this year for a third time.

Today, I play two or three paid gigs a month with my band and take occasional chamber music workshops. I also participate in music events with my local Odd Fellows lodge, which puts on a summer concert series that benefits school music programs. And I’ve started bringing the upright into the Blues band—a new and exciting synergy.

I made a fateful decision 15 years ago to take on the bass, and it opened a world of enjoyment and friendship. It shows that when you love something, it’s never too late to start.