Below is a guest contribution by violinist Joel Epstein, author of the new book Music for the Love of It: Episodes in Amateur Music-Making. 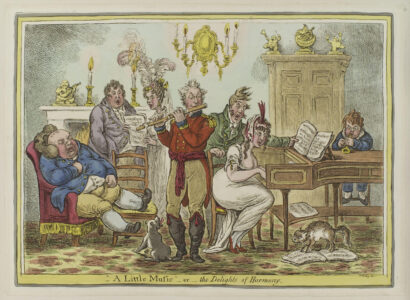 The illustration above is a cartoon by James Gilray from the late 18th century called “A Little Music, or the Delights of Harmony.” It illustrates one of the recurring themes of the book—that, while in society women may have been subordinate, in the music salon they were more than equals.

As an amateur violinist, I feel—and, I think, most of us feel—that I am carrying on a great tradition reaching back hundreds of years. A few things inspired me to explore that tradition, an exploration which eventually culminated in my book Music for the Love of It: Episodes in Amateur Music-Making.

The first thing that tickled my interest was the dedication on the title page of the Brahms string quartets opus 51: “To Theodor Billroth.” The name was vaguely familiar but I wasn’t sure who Theodor Billroth was. A quick check of Wikipedia revealed that he was a leading physician, an amateur violist, and an intimate friend of Brahms. In a used bookstore I found a collection of Billroth’s and Brahms’s correspondence, which provided a fascinating insight into the composer’s creative mind and the key role the amateur violist played.

The second thing was Cobbett’s Cyclopedic Survey of Chamber Music. This two-volume tome from 1929 I also found in a used bookshop. It is far more than an encyclopedia—it is one man’s personal encomium to the wonders of chamber music. The world of chamber music, Cobbett wrote, “…was an art for which I had a definite affinity. It is not an exaggeration to say that there opened out before me an enchanted world into which I longed to gain an entrance.” The encyclopedia was, like all encyclopedias, erudite, comprehensive, and written by leading experts in the field; on the other hand, it was filled with Cobbett’s own expressions, very personal and very eloquent, of his love for the glories of chamber music.

One thing led to another, and I found myself delving into other episodes of amateur music-making in history: the pivotal role of women in promoting amateur music in America; the brass band movement in Britain, which began as an attempt by moralists and by industrialists to use music to reform retrobates and to quell labor unrest in the coal mines and textile mills of Britain, and ended up as a mass musical movement that swept the country; the romance of Russian Jews of the early 20th century with the violin. In the end, it all started to fit together into a coherent story about the very tradition that we all feel to be our joyful duty to sustain.

The views and opinions expressed in this blog post are those of the author, and do not necessarily reflect the views or positions of AMN.

Laura Magnani joined series moderator Cathy Angelo by Zoom to talk about her relationship with Paul Hersh and her deep connection to Chopin’s piano music.

“I’ve felt this connection with Chopin ever since I was very little – it came as a primordial call.

When I first started playing Chopin’s Ballade No. 3 in my teens, it was a very difficult work for me – there were many challenging technical details of dynamics, pedal, voicing, and touch to overcome. In time after studying all four ballades and many other piano works, you come to terms with Chopin’s language and style. And then you start to understand what he meant in a particular part of the third ballade and you go back and revisit everything with new knowledge. Once I reached a point where the technique was not such a big challenge and I could go beyond the stress of playing the notes, it was very helpful to read the four poems by Adam Mickiewicz. The poems were not a direct influence, because Chopin was a purist, he would not understand or agree with any external connection between the music and other things. His music is never descriptive [of] a poem or a landscape. In fact he doesn’t have names for his compositions, they’re scherzos, ballades, etudes, sonatas – there are no descriptions. But I couldn’t help seeing the deep impression he received, particularly for the third ballade, from the poem about Ondine, who is the goddess of water. Throughout the piece there’s the feeling of being under a spell of a nymph who has an agenda towards the shepherd – she wants him to get into the water and get lost in the water so she can possess his soul. It’s just so obvious to me that there is a story behind this piece even though it’s not declared, it’s not named so when I play it, it goes in front of my eyes like a movie, it has a narrative, it has a story to tell. That’s what I love about this piece.

The third ballade has a particular way of describing an inner state of being completely fascinated, almost under the spell of something bigger than you, almost paranormal – when you’re drawn into something, a call you can’t resist – and this piece has that call in the main theme. It’s like something is calling him irresistibly. It’s so human, it is such a description of the human journey, and part of the human journey is to be magnetized by things that we can’t understand. We get so wrapped up and completely involved to the point of being completely lost – it’s a feeling between wonderful and terrifying, and I think this piece conveys all these feelings. That’s why it is so compelling to me.”

I hope that you will join AMN’s third session of the Piano Conversations series on May 4 as Paul and Laura explore one of Chopin’s best-known piano works, Ballade No. 3  in greater depth.

Learn more in this preview video!

Tickets are $65 for the series, $20 for individual sessions.

Christopher Basso joined Cathy Angelo, moderator for the upcoming Piano Conversations series, to talk about his relationship with Paul Hersh.

“I don’t recall my musical life without Paul!”

Christopher Basso has known Paul Hersh for over 40 years since working on his undergraduate degree at the San Francisco Conservatory of Music. “His words and his insights into the music have stayed with me over all of these years and even in my own teaching today, I find myself harkening back to the things that I’ve learned from Paul – elements in the music I look for as a result of studying with him. I think for musicians in the Bay Area, Paul is central to that musical life not only for pianists but string players, because Paul is in that unique position where he’s a pianist who is also a violist, so he is exposed to music and plays music that pianists can only dream of. He adds insight from a string player’s point of view, which is more rare with pianists. I don’t know any other pianist who also plays another instrument professionally.”

In a masterclass series that Paul gave at the Conservatory on Beethoven’s 32 piano sonatas, Chris remembers hearing the 3rd movement of Op. 109 for the first time – “I’d never heard anything like it!  I’ve studied the piece for over four decades on and off, and every time I come back to it there’s new insights, new things to be discovered – you never finish a piece. That’s the great thing about music, it’s a living thing, so every time I come back to it, there’s been something else that I’ve picked up on.”,

Join us for the first session of AMN’s Piano Conversations series on April 20 as Paul and Christopher explore the theme and variations of Beethoven’s piano sonata, Op. 109 in greater depth.

Learn more in this preview video!

Tickets are $65 for the series, $20 for individual sessions.

Jef Stott here and I’m a music producer and educator here in the Bay Area and I’m really excited to present my class on music production in Logic Pro for Amateur Music Network. Producing music has been the focus and passion for most of my life and I can’t wait to share my knowledge and insights with you.

This is going to be a great series of classes for composers/ producers and musicians interested in digital music production. All students are welcome, these classes are definitely geared towards the entry level.

You’re going to learn how to mix your tracks, produce your own songs, and write your own beats and bass lines. We will also learn to edit vocal and instrumental tracks. We’re going to cover a wide range of genres, from electronic and urban to traditional recordings of live instruments.

It’s not going to be purely technical! We’re going to talk about the aesthetic choices that people are making as they are producing music. We will definitely go under the hood into the mechanics of music production.

We’ll discuss recordings we’ve listened to and learn about the role of the producer:

We’re going to answer a lot of those questions in this class.

We’ll focus on Logic Pro, the music software, but the concepts I’m going to be teaching in the class are going to be universal, and you can apply them to Pro Tools, Ableton or any other music software. We’ll review important basic concepts such as audio editing, MIDI production, microphones, mixing, and more.

It is going to be a fantastic series of workshops and a true intensive with three sessions in one week. I really hope that you can join me.  It is my honor to teach all that I have learned and I can’t wait to share everything with you.

Jef breaks down the power of Logic Pro software for you.

Imagine … where does music live if not in our imagination? No static thing, unchanging and immutable, music has to be played, and heard. The music is the sounds, not the marks on the paper, not the grooves on the record, not the zeros and ones in the digital media. It only makes sense as something we hear — and it makes its own separate sense to each of us in its own separate way.

That’s where we’re going with our six-week workshop Imagine. We’re exploring the heard experience of music, not what it should be or what’s correct. Sure, along the way we’re going to explore some of the nuts & bolts of symphonies, concertos, and symphonic poems — but always as experiences in our own minds, triggers that elicit reactions, emotions, feelings, physical sensations, memories. For Proust it was a madeleine; for us it can be a moment in a work by Beethoven, Brahms, Debussy, or maybe the song of a skylark in the evening sky.

Get a preview of our workshop as Scott talks with AMN Founder Lolly Lewis about the surprising joys of listening and what he hopes people will take away from the experience.